Maybe this is really a "Toasted Pecan Omelette," but the taste reminds me of my mom's french toast, so the title stands. 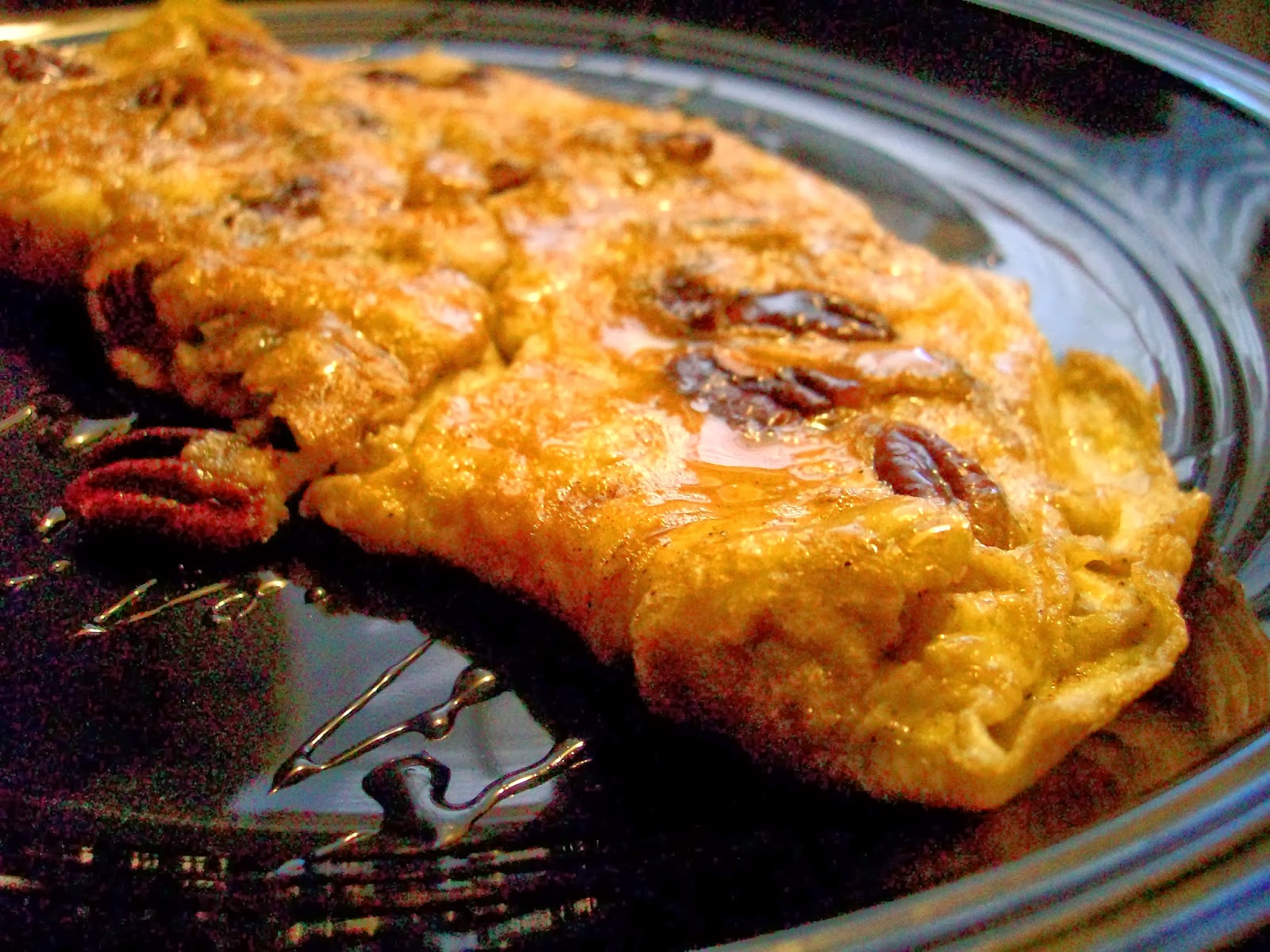 In a small bowl or measuring cup, beat the eggs and vanilla together; set aside. In a large nonstick pan, melt coconut oil over medium heat. Add pecans, and saute until fragrant and slightly browned (be careful not to burn them). Add cinnamon, and toss once or twice to coat pecans. Pour eggs over the pecans, and tilt the pan around to equally distribute the eggs. When the eggs have mostly set, flip the omelette in half, and remove from heat, allowing the eggs to finish setting for about 20 seconds. Slide onto a plate, and drizzle a little honey over the top. Serve immediately.


Snagged this recipe here, and it's excellent, although I found the cooking directions a little bit vague; I've tried to improve them a bit based on my experience with it. 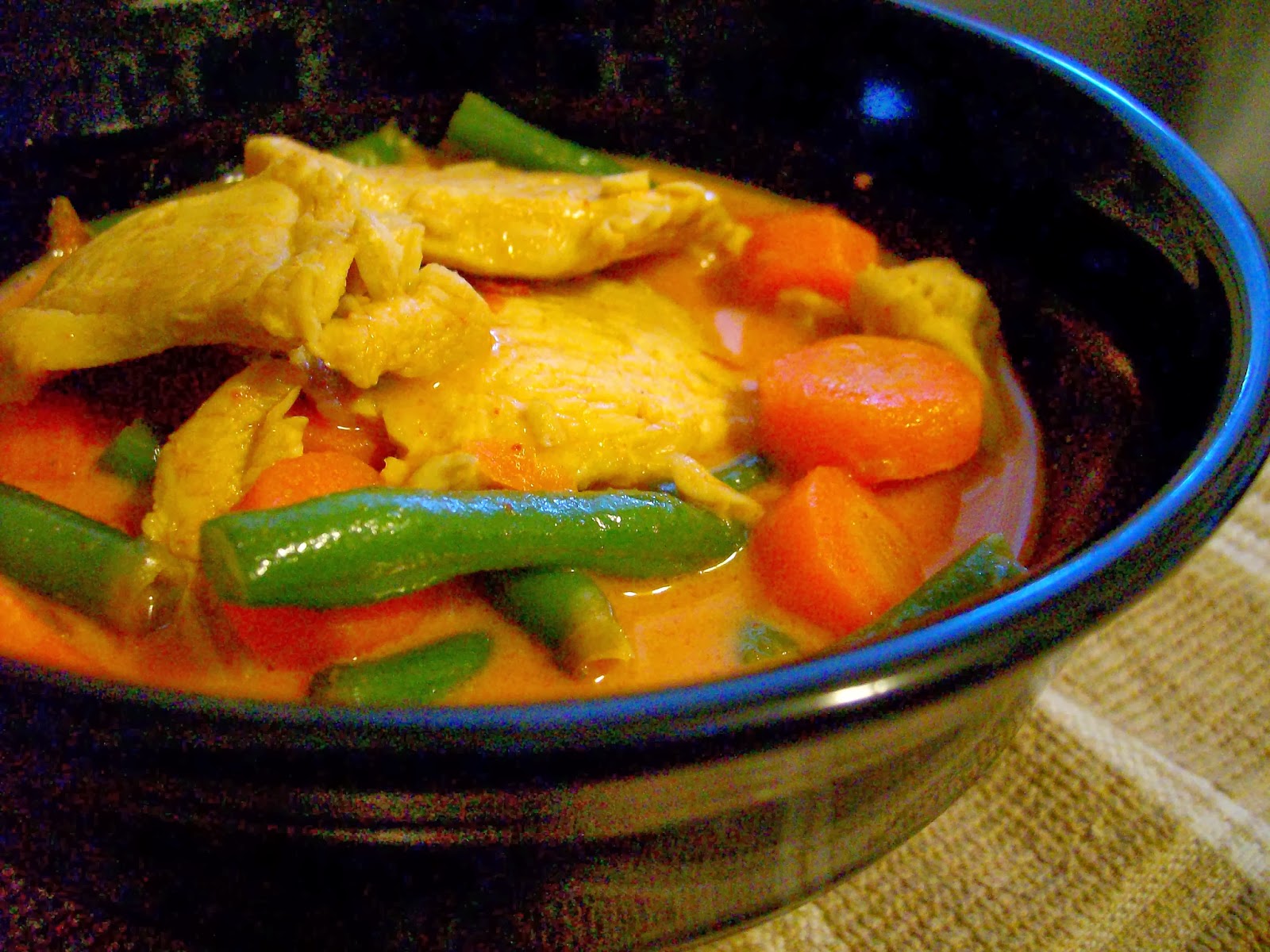 ("Serve with what?" you may ask. "Do you substitute cauliflower for rice? Do you use rice? What do you do??" Nothing. Curry doesn't need rice to complete itself. Curry is amazing and wonderful and delicious and whole all on its own. Put on your big girl panties and eat the delicious curry.)

Posted by losterman at 3:54 PM No comments:

Well, after a 2+ year hiatus, I'm back with new recipes. As it turns out, eating paleo might be sustainable for a busy graduate student, but blogging about eating paleo is less so. We'll see if a newly-appointed tenure track professor can keep up with it. In the weeks to come, expect a lot of curries, of various ethnic origins. I'm very into making curry right now. 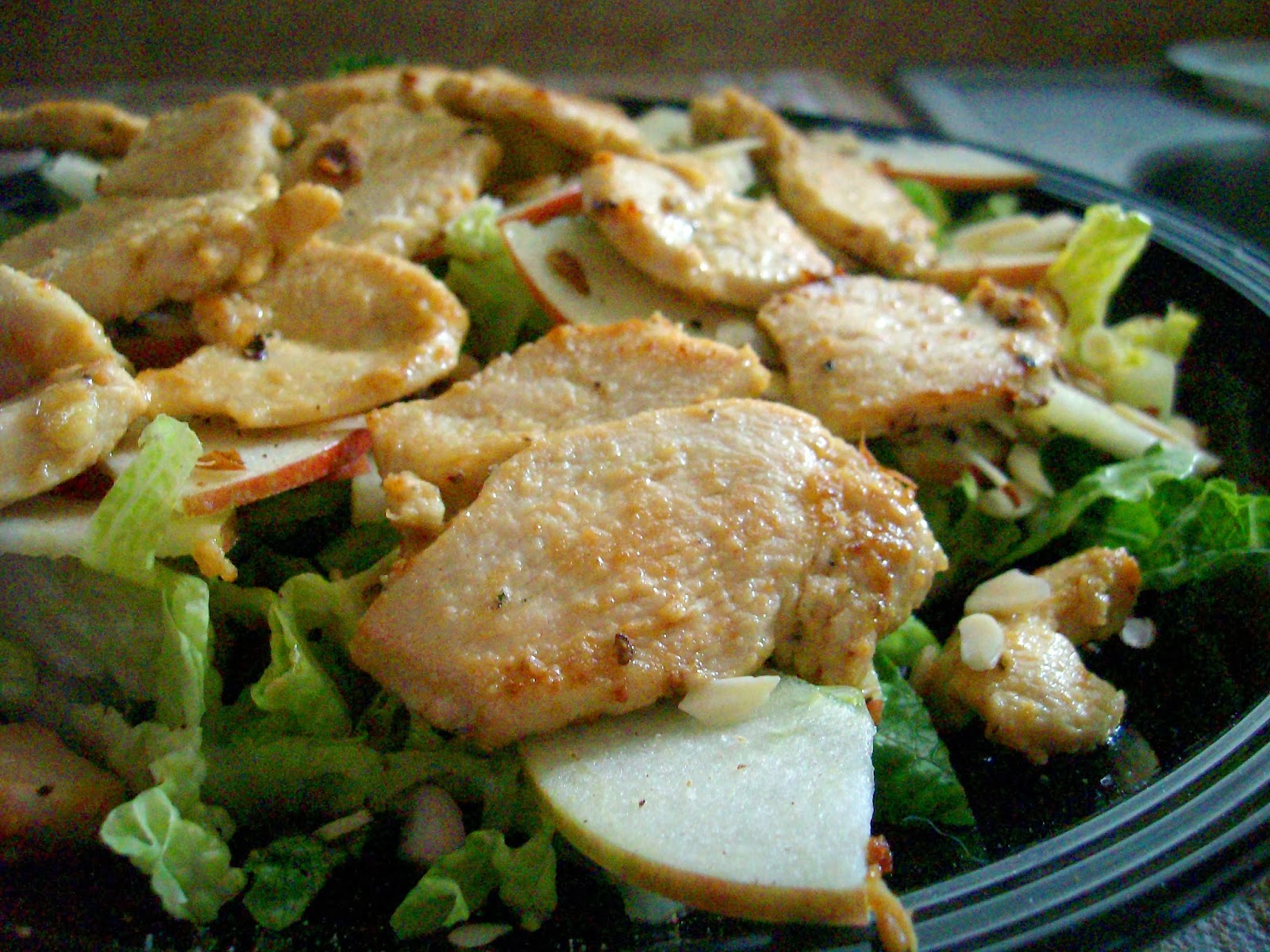 In a saucepan, heat olive oil over medium heat. Season pan with a few turns of sea salt and pepper. Add sliced chicken breast, and coat well with Dijon mustard. Saute until cooked, around 5 minutes. While the chicken is cooking, add greens to a plate, and season with vinegar, oil, salt and pepper. Add apples and almonds. Top with chicken. 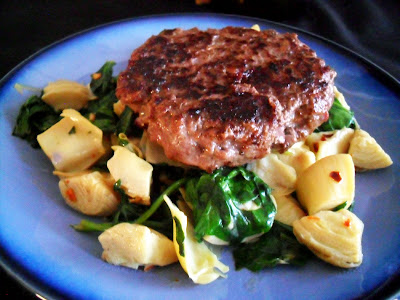 Native Roots just started carrying ground venison and elk! Yay! Tonight, I had my first voyage into cooking up Bambi, and he was every bit as tasty as I thought he would be.

Over medium heat, cook bacon until crispy. Remove bacon to a large bowl, reserving bacon grease in the pan. Add garlic and shallots to the bacon grease, and saute until soft, stirring constantly to prevent burning. Add garlic/shallots to the bowl with the bacon, and allow to cool for 5-10 minutes. Add venison and remaining ingredients to bowl, knead with hands until thoroughly mixed. Form meat into 4-5 balls, and lightly press into patties.

Cook on griddle, grill, or in a skillet until thoroughly cooked, flipping every few minutes to prevent burning.

I ate mine (as pictured) with spinach and artichoke hearts, lightly sauteed in clarified butter with a little garlic and red pepper flakes, and the combo was really, really nice. Next time, I'll probably saute onions and mushrooms with some bacon; one can never have too much bacon. 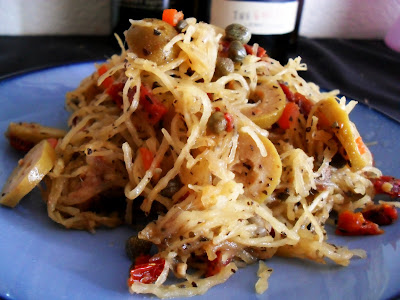 Another Gordon Ramsay adaptation. This dish is super flavorful and exciting, and most of all, the tangy sweetness of the sun-dried tomatoes balances out the salt in the dish really well, so don't let the anchovies scare you off. Despite my love for salt, I find anchovies pretty repulsive in isolation, but they work really, really well in the context of this dish.

Heat olive oil in a large skillet over medium heat. Add garlic, shallots, and chili pepper, and saute briefly, until shallots begin to soften. Add tomatoes and anchovies, and mix thoroughly (make sure that you break up the anchovies well--otherwise you'll end up with big mouthfuls of it, and that's a lot of salt). Add capers, olives, and basil, mix well. Finally, add spaghetti squash, mix well with other ingredients, and cook until heated through. 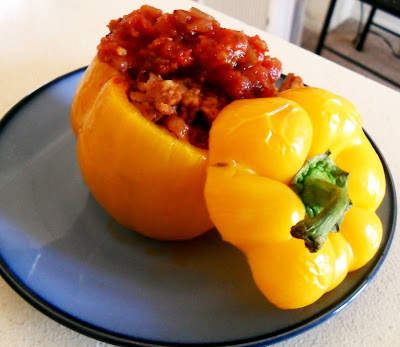 I always struggle to find ways to use leftover pork roast (5lb roast + 1 person = many, many days of pulled pork). Why didn't I consider adding bacon sooner...?
Pig Peppers
-1 sweet pepper (just choose your favorite color)
-2 strips thick cut bacon, chopped
-2-3 oz leftover pulled pork
-1-2 oz chorizo sausage
-1 shallot, chopped
-Salsa to garnish
Preheat oven to 400 F. Cut the top off the pepper, and clean out the seeds. Over medium heat, cook the bacon until it is just beginning to brown. Add chorizo and shallots, and cook until the sausage is thoroughly browned, and shallots are soft. Add pulled pork, and heat through. Stuff as much of the mixture as you can into the pepper (snack on the remainder, if you're me), place the top back on, and cook for about 15 minutes, or until the pepper has softened. Top with your favorite salsa to serve.
~Losterman
Posted by losterman at 12:23 PM No comments:

I've been eating a lot of these lately, and they're all awesome, but it would be pretty obnoxious to do a separate post for each of them, especially because the prep is essentially identical for all omelets/frittatas. But all of these combos are tested and (enthusiastically) approved, and they're super quick--check em out.
Peach & Pecan
-2 eggs
-1/2 peach, diced
-A handful of pecans (2-3 oz), chopped
-Vanilla & cinnamon
-Coconut oil 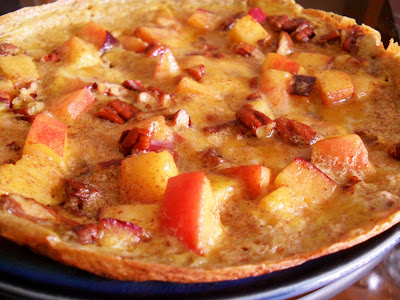 Carrot & Parsley
(I was surprised that this one turned out as well as it did--the carrots get uber sweet when you cook them down enough.)
-2 eggs
-1 shallot, finely chopped
-1 carrot, shredded
-1 dried chili, chopped (optional)
-A few sprigs of fresh parsley, chopped
-Sea salt & pepper
-Coconut oil 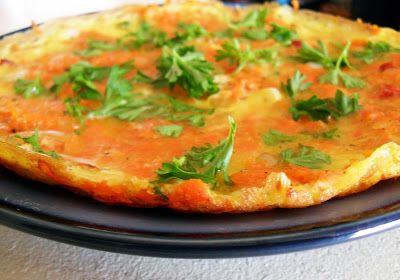 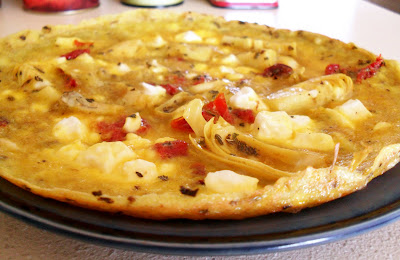 Basic instructions: Heat oil in a small pan (I use an 8" non-stick for these occasions) over medium heat. Beat eggs with a little salt/pepper (or vanilla and cinnamon for the first recipe), and set aside. Add veggies (or fruit) and any seasonings to pan,* and saute until they begin to soften. Pour eggs around the perimeter of the pan, and tilt to distribute the eggs through the veggies. Cook until the eggs set.
*For the carrot & parsley recipe, don't saute the parsley with the veg, sprinkle it on top once the eggs are in the pan.
Be sure not to overcrowd your pan with the veggies/fruit, or the eggs won't cook evenly--burned on the bottom and raw on top. Gross.
~Losterman
Posted by losterman at 3:31 PM 3 comments: